Do chronic respiratory diseases or their treatment affect the risk of SARS-CoV-2 infection?

Reducing mortality and spread of COVID-19

How can we model the epidemiology of COVID-19?

how to organise data management at a research consortium level

Behavioural interventions to reduce the spread of COVID-19

DUMMY Variation in sex ratio among populations of field crickets

Obedience to Authority in the Milgram Paradigm

Are patients with hypertension and diabetes mellitus at increased risk for COVID-19 infection?

DUMMY Variation in sex ratio among populations of field crickets

A systematic review of COVID-19 cases

Collating public data on COVID, made Open and accessible

Method for meta-analysis of studies of R0 for COVID-19

Data on respiratory co-morbidities in COVID-19, SARS and the general population

Data repository of public and Open data on COVID

Results of a meta-analysis of R0 for COVID-19

Results from the Milgram Obedience

Those with chronic respiratory conditions under-represented in COVID-19 cases

Could treatment for COPD be protective against COVID-19 symptoms?

Hypertension is the main risk factor, other than age, for COVID-19

ANALYSIS: Analysis of the data from a retrospective cohort study of 191 inpatients in Wuhan with COVID-19

We included 171 patients with complete data for all variables (53 non-survivors and 118 survivors) in the multivariable logistic regression model. We found that older age, higher SOFA score, and d-dimer greater than 1 μg/mL at admission were associated with increased odds of death (table 3). When adjusting for study centre, our generalised linear model showed similar results (appendix p 5).

Figure 1. Clinical courses of major symptoms and outcomes and duration of viral shedding from illness onset in patients hospitalised with COVID-19

Major laboratory markers were tracked from illness onset (figure 2). Baseline lymphocyte count was significantly higher in survivors than non-survivors; in survivors, lymphocyte count was lowest on day 7 after illness onset and improved during hospitalisation, whereas severe lymphopenia was observed until death in non-survivors. Levels of d-dimer, high-sensitivity cardiac troponin I, serum ferritin, lactate dehydrogenase, and IL-6 were clearly elevated in non-survivors compared with survivors throughout the clinical course, and increased with illness deterioration (figure 2). In non-survivors, high-sensitivity cardiac troponin I increased rapidly from day 16 after disease onset, whereas lactate dehydrogenase increased for both survivors and non-survivors in the early stage of illness, but decreased from day 13 for survivors. 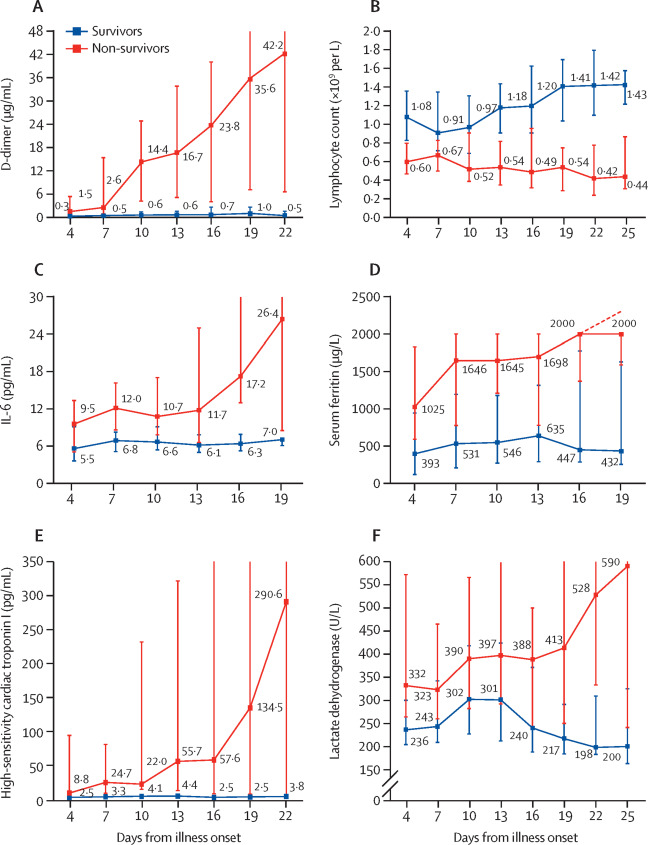 Figure shows temporal changes in d-dimer (A), lymphocytes (B), IL-6 (C), serum ferritin (D), high-sensitivity cardiac troponin I (E), and lactate dehydrogenase (F). Differences between survivors and non-survivors were significant for all timepoints shown, except for day 4 after illness onset for d-dimer, IL-6, and high-sensitivity cardiac troponin I. For serum ferritin (D), the median values after day 16 exceeded the upper limit of detection, as indicated by the dashed line. COVID-19=coronavirus disease 2019. IL-6=interleukin-6.

Continuous and categorical variables were presented as median (IQR) and n (%), respectively. We used the Mann-Whitney U test, χ2 test, or Fisher's exact test to compare differences between survivors and non-survivors where appropriate. To explore the risk factors associated with in-hospital death, univariable and multivariable logistic regression models were used. Considering the total number of deaths (n=54) in our study and to avoid overfitting in the model, five variables were chosen for multivariable analysis on the basis of previous findings and clinical constraints. Previous studies have shown blood levels of d-dimer and Sequential Organ Failure Assessment (SOFA) scores to be higher in critically ill or fatal cases, whereas lymphopenia and cardiovascular disease have been less commonly observed in non-critical or surviving patients with SARS-COV-2 infection.5, 6, 12Similar risk factors, including older age, have been reported associated with adverse clinical outcomes in adults with SARS and Middle East respiratory syndrome (MERS).3, 13 Some laboratory findings, including alanine aminotransferase (ALT), lactate dehydrogenase, high-sensitivity cardiac troponin I, creatine kinase, d-dimer, serum ferritin, and IL-6, might be unavailable in emergency circumstances. Therefore, we chose lymphocyte count, d-dimer, SOFA score, coronary heart disease, and age as the five variables for our multivariable logistic regression model.

We excluded variables from the univariable analysis if their between-group differences were not significant, if their accuracy was unconfirmed (eg, exposure, which was self-reported), if the number of events was too small to calculate odds ratios, and if they had colinearity with the SOFA score.

A two-sided α of less than 0·05 was considered statistically significant. Statistical analyses were done using the SAS software (version 9.4), unless otherwise indicated.

Conflict of Interest Declaration:
None

Red Flag "Analysis of the data from a retrospective cohort study of 191 inpatients in Wuhan with COVID-19" ?

Octopus. Built for scientists.
This page has been printed from https://app.science-octopus.org/publications/view/5e9498ca5706eb67777ae952